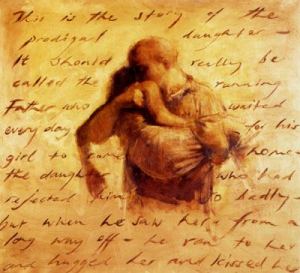 17But when he came to himself he said, “How many of my father’s hired hands have bread enough and to spare, but here I am dying of hunger! 18I will get up and go to my father, and I will say to him, ‘Father, I have sinned against heaven and before you; 19I am no longer worthy to be called your son; treat me like one of your hired hands.’ ”

I know the title is a little redundant but be patient with me. Back in March, I reflected on the Prodigal Son (or daughter, you figure it out) as we traveled on the Lenten Journey. Since then, I’ve had time to do more reflection.

During that time, I’ve come to realize just how much courage the Prodigal Son had.  Can you imagine?  The son had enough courage and strength to come home and face his father. He reminds me of the woman, who in the midst of a judgmental crowd, reached out with every ounce of courage and strength to touch the cloak of Jesus. She didn’t give up and neither did the Prodigal Son.  He knew what he would be facing (or so he thought): an upset father; angry brother; harsh community and a justifiably humiliating return.  Despite all of that, the Prodigal Son returned.

As one who has been the Prodigal Daughter that wanted to runaway, hide and never return; for the guilt and shame I have brought on myself; and the pain I have caused others – I am grateful for the story of the Prodigal Son.  He reminds me of the strength and courage that I can find in the midst of the wilderness, to turnaround and make my way back home.  I know when the Prodigal Daughter returns, her Father will be waiting for her – with open arms.

3 Responses to The Prodigal Son Returns